The CWTS Leiden Ranking 2019 has released a new set of indicators for open access (OA) publishing.

The new OA indicators combine data from Web of Science and Unpaywall on four types of OA and an overall indicator for all forms of OA[1]. .

The four types of OA are:

Over 2014 – 2017 an average of 32% of OA publications were Green, 13.3% Gold, 8.7% Bronze and 5.6% Hybrid across all universities. The sum of these figures (60.1%) is greater than the total proportion of OA publications (40.3%), suggesting that perhaps half of Australian OA publications are being made available via more than one OA model. 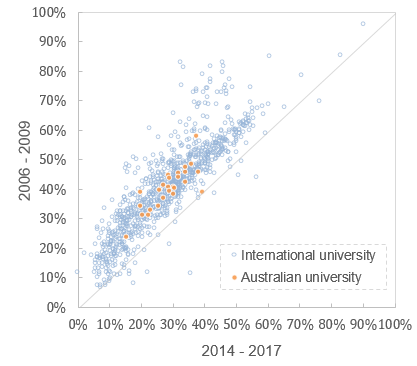